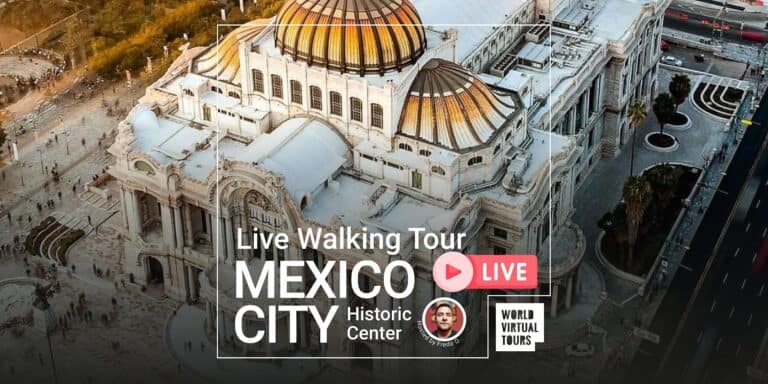 On a walk through the Historic Center of Mexico City it is possible to be in contact with many representative elements of various historical stages. Here the great buried city of the Aztecs, the seat of the colonial viceroyalty of Spain in the American continent and the modern capital of the Republic of Mexico, which is one of the ten most populous and extensive cities in the world, are condensed into a single urban sprawl.

To walk on the streets of this metropolis is to find stories in every corner. It is possible to discover stories of the Aztec empire and how they lost their domain in a clash of worlds when they fell against the Spanish conquerors. We will also walk on the remains of its great pyramid-temple and we will observe part of the archaeological works that have brought back to light some of the most impressive examples of Mesoamerican architecture.

As we move forward, we will find rich samples of the colonial era. Mexico City was a point of reference for the Viceroyalty of New Spain and that is why you can see great churches and colonial buildings. We will be next to important parts of the convents and palaces that were built on the remains of the ancient Tenochtitlan during the 300 years of Spanish occupation. In particular, we will go to the great Plaza de la Constitución, the second largest public square in the world, from where we can appreciate the monumental Metropolitan Cathedral.

Stories and references of independent Mexico and wars against foreign powers and internal wars also abound. We will be in front of the palaces Bellas Artes and Postal, monumental and stylized architectural projects, miraculously completed despite the start of the Mexican Revolution at the beginning of the 20th century. We will take a look at modernity as we pass by one of the first skyscrapers in the world to have an anti-seismic system and we will make some recommendations to be able to fully enjoy this part of the city when you are in it.

ATTENTION:
⛈️ In case of adverse weather conditions, the walking tour will be canceled and rescheduled without notice.