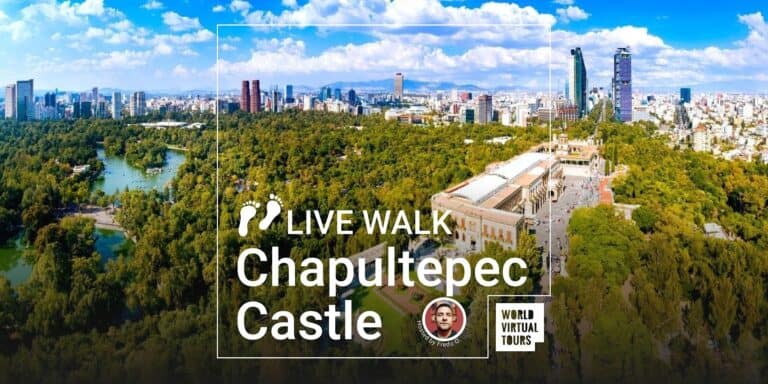 A forest sacred to the Aztecs has survived many of the most important episodes in North American history. Chapultepec is today one of the most visited public parks in the world and when walking through it, it is possible to find a series of unique relics throughout the continent. The Chapultepec Castle on top of the hill is the most representative symbol of the passage of centuries of history through Mexico City.

A “little volcano” in the middle of the great city of Mexico has been, since Aztec times, a platform to worship the deities of the ancient world. They were the ones who named this area Chapultepec and today you can visit archaeological remains such as the starting point of the aqueduct that the Mexica themselves built more than 500 years ago.

After the Aztec defeat and the Spanish conquest, Chapultepec became a resting point for the rulers of the colony and it is at that time that the castle that we will visit on this tour was conceived. We are also going to know symbolic points of historical episodes such as the most famous battle of the Mexico vs. United States war in 1847.

After climbing the “Grasshopper Hill” we will enter the courtyards and gardens of the Chapultepec Castle, a building that is best known for being the residence of Maximilian of Habsburg and Charlotte of Belgium, rulers brought from Europe to form the Second Mexican Empire after the defeat of the Mexican Liberal Republic against the French army.

We will find symbols of all these times and even masterpieces of Mexican muralism, advancing towards the 20th century. This tour is unique for the peculiar facts of which we can find evidence and for the visit to what is considered the only authentic castle in the Americas.

⛈️ In case of adverse weather conditions, the walking tour will be canceled and rescheduled without notice.